Henry McCoy is a mutant in the service of Apocalypse. He is the head geneticist, conducting experiments on humans and mutants alike.

While Henry McCoy was doing experiments with Frederick Dukes in his lab, Alexander Summers and Scott Summers witness the experimental mutant break loose and attack McCoy. Scott blasted Dukes to rescue them. Alex immediately got into an argument with his brother, which was ended by Sinister. McCoy quickly slipped out unnoticed. 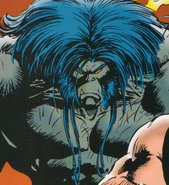